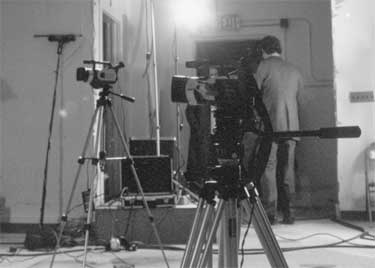 This production was shot in thewinter of late 2002 over 2 weeks at Boise's own armory which was abandonedsome time ago.  It was photographed using a pair of Canon GL1s attemperatures as low as 40 degrees.  The Armory had no electricityor heat in the upper levels so special routing had to be made to establishthe 6000-7000 watts needed for lighting.

Photography was done by FTB llcand GCM respectively while sound was recorded on a 16 bit hard disk byowyheesound. FTB is well known for the ambiguous "Half Ass Jig" which was also completedlate in 2002.

Needless to say this was a challenging production from the beginning. Editing is yet to be completed but we're all confident it was a learningexperience to say the least.

GCM was also involved in the productionof "The Fall" and "Glimpse" which were shot on an Arri-16mm camera. This was a large step forward for both GCM as well as Small Pond as theywere the first productions shot on film for the both of us.  "TheFall" was shot in one day in the desert outside of Boise.  "Glimpse'was shot in several locations over a period of about a month. 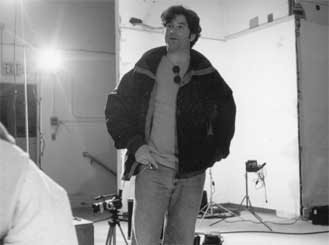 While GCM and the other companiesassociated with Small Pond have not yet ventured much into digital compositing,it will be a necessity for projects in the future.  All seem to agreethat CG is more or less out of the question.  However, several peoplehave worked with various mechanical effects and GCM will soon move intooptical effects.  These are the tools needed for the next large project. The compositing will most likely be pure matte effects using normal footageshot on widescreen DV.  The plan is to adapt anamorphic lenses toachieve the 2.66:1 aspect ratio of the early 35mm anamorphs.  Thissystem is still problematic as it may very well always be.  Thus GCMis trying to convince Owyhee Sound, the originator of this idea, to usea matte based widescreen or better yet, Todd-AO.  But this is notlikely to happen as it is less challenging & yeilds better results. 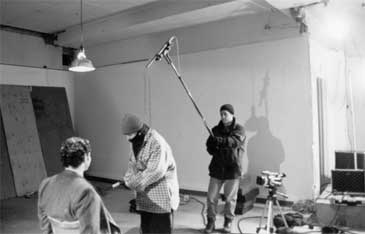 One mirraculous thing about theprojects in which GCM has been involved is that each one helps build towardthe goal of creating a market for a high class film industry in Boise Idaho. If we can achieve this goal, Small Pond and it's surrounding productioncompanies can reap a tremendous reward for being not only the first pushfor such a goal, but having the ability to handle all aspects of productionfrom beginning to end; writting, producing, editing and possibly advertising.
It's also my personal hope to introducea new film format to mark a point between thesimplicity & low cost of Super-8 and the higher quality 16mm.
GCM is available for hire, justas for recording, at $35 per hour.  For inqueries, contactme.

GCM is now starting preproduction in association with owyheesound on a new film schedualed to be shot on super-duper-8 color negative film. This film will be a ground-breaking adventure for Smallpond Films due to the new concept behind the production techniques. It is possible that the movie will be shot using a special anamorphic widescreen format on top of the modified super-8 format. Super-duper-8, though an unfortunate name, is a new inovation where the image is exposed into the part of the film normally reserved for a magnetic audio track. This is done by enlarging the film gate. This achieves a wider image that is 1.5:1, AKA 3:2 in aspect ratio. An anamorphic adaptor that will laterally compress the image an extra 1.333x onto the small frame to achieve a perfect 2:1 width to height ratio. The technitian at GCM feels this aspect ratio is more pleasing to the eye than the dissonant 16x9 or 1.85:1 ratios. For more information on the new production, go to Ascension. For more information on super-duper-8, go to the inventor's website at Friendly Fire Films. For more information on anamorphic lenses, go to owyheesound
note, all photographs were taken from the setof Juan Diego.

Due to an unruly amount of spam at my business E-mail, I have to resort to using a graphic of my address instead of allowing you to click to instantly gain access. Just type what you see in the image below into another window. Sorry for the inconvinience.